Smartphones and its associated innovations are redefining the social structure of contemporary human societies. Hardly goes a day in the lives of majority of the inhabitants where they abstain from using smartphones. Those with consistent abstentions are labeled as outdated. These signs indicate that the societies of current generation are in the middle of social mobility triggered by smartphones.

Experts forecast that the number of smartphone users will reach as high as 2.5 billion by the end of 2019. The technology penetration in various industries and households is remarkable. It governs the activities of most of the users.

Unraveling the Concept of Social Mobility

History reveals events when the policies and inventions of times revolutionized the societies. The introductions of civilization, agriculture, formal education, and industrial revolutions during different ages are some of the most significant events.

Each of these phenomena caused remarkable movement in the social status of human beings. They inducted welcoming changes in their lifestyles. The movement of social status owing to a landmark phenomenon defines social mobility.

The mobility may not necessarily improve the status. There are occasions when irresponsible and unethical use of inventions result in declining statuses.

Currently, the rapid rate of increase in the cycle of innovation is making the mobility faster than ever. Digital revolution resulted in social mobility a few decades back. Now, the inventions of internet and smartphone are causing second social mobility in less than half of a century – the first time in recorded history.

The commercialization of internet is arguably the most notable development of past hundred years. Next most noteworthy development is the invention of smartphone which is causing the social mobility. The technology integrates with the urban civilization up to the extent that smartphones and globalization complement each other.

Analysts forecast that the reason behind upcoming social mobility will be artificial intelligence. However, the AI will further supplement the smartphones-stimulated mobility. Thus, the current generation is set to witness the second social mobility inside a 50 year time period. Many people have traversed through three distinct mobility phenomena during this period.

One prominent symptom of social mobility is the change in the nature of earning sources for a community. While new ways of earning originate, many existing ones go obsolete. Smartphone is a single most influencing factor causing major impact of smartphones on economy in current times.

Only a couple of decades back, the commuting and ride-hailing ways were entirely different from those now. Tracking the vehicle by a passenger was impossible. The only tracking source was the driver himself. The passenger had to walk to the vehicle instead of having a vehicle reaching up to the ride-seeking person.

The smartphone initiated a relentless emergence of on-demand taxi service and commuting business. A user may book and take the ride from one’s doorstep. One may acquire a bus ticket with a few taps on mobile without going to the station.

Transportation is only an instance of a vast development in the on-demand industry. Logistics, home services, real estate, and retail are a few more examples. Hence, users can perform most of their tasks from their smartphones.

Many analysts argue that “disruption” is an inappropriate choice of word. Instead, they believe, that these industries did not disrupt. Rather they evolved. This position is plausible too because the proportion of created jobs since smartphone revolution is higher than the proportion of layoffs. WEF reports that the emerging technologies will generate over 130 million new jobs by 2022 against 75 million layoffs for declining roles.

The astonishing number of changes in job creation and industrial disruption indicates that we are traversing through the phase of social mobility.

The contribution to enhancing the ongoing social mobility with smartphones is not as simple as it seems. Entrepreneurs have to meet consumer demand, satisfy regulators and generate significant revenue at the same time. Up to 90% of the startups fail each year. Most of the investors fail to raise a successful startup because they are unable to meet one or more of these three requirements.

Many startups incorporate a wide range of functionalities in their apps. For instance, the users are able to observe events happening around, communicate with friends, entertain themselves, and perform daily household chores with various apps.

However, the fierce state of competition requires the developers to integrate more of these tasks in the same app – that too with optimum efficiency. Thus, the apps should be aggregating the similar set of user’s choice in the same place. As a rule, investors and developers need to ensure that the idea should make a considerable improvement in social mobility.

Another approach to tackle the vast pool of demands is to explore consumer interests. The businesses may determine this interest or behavior by observing the market trends. They must be mindful that the flexibility to incorporate change can sustain the businesses. Many companies perform well in the beginning but flop in the long run for failing to allow changes.

The AI, blockchain, IoT, and big data are four major factors which will rule the smartphone apps industry for at least a couple of decades from now. Meanwhile, each of these technologies is also the crucial catalyst of social mobility with smartphones. They will also increase the impact of smartphones on society.

Very few entrepreneurs understand the fact that the smartphone itself is not the driver of ongoing social mobility. Instead, the mobile app industry is the underlying force. The successful investors precisely identify the users’ behavior and introduce the apps which correspond to needs of society. They also ensure to keep a window of change so that the businesses evolve with changing industrial trends instead of becoming obsolete.

ODTAP loves to help passionate entrepreneurs. Contact us today to learn more on on-demand industry and its business potential. 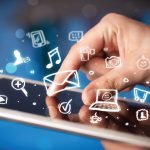 Significance of Mobile Technologies for Business On-demand Business: From Surviving to Thriving Amid Covid-19 The Rise of On-Demand Services in Africa